A need for power

There is no shortage of circumstances in which the Belgian Federal Police needs to have powerful vehicles at its disposal. Amongst the vehicles in its fleet, some need more power and torque than others. Unmarked cars are often bought in standard trim so that they disappear into the crowd. They are then subject to the adaptations which their use requires. But the engine always keeps its original parameters. This can sometimes cause problems in emergency situations. This is why the idea came to give P-Tronic a call and test an additional box unit.

To carry out this test, the Belgian Federal Police selected a vehicle dedicated to urgent intervention work. An unmarked car whose identity, in terms of brand and model, we will not reveal for necessary reasons of security. Suffice it to say that there is a 140 bhp 2.0 litre common rail diesel under the bonnet.

The box unit was fitted in the P-Tronic workshops. In just a few moments the power was moved up to 181 bhp, an increase of 41 bhp, or 28%. Where torque is concerned, the evolution is of the same order  up 27% from 320 to 407 bhp. These figures were confirmed by two successive trials on the power testbed, and which officer Eric G., the nominated driver of the car, couldnt wait to try out on the road.

Eric knows his work car very well. He spends a large proportion of his working day driving it. Or, in certain cases, racing it. And he certainly knows how to drive it! Once the box unit was installed and he got in behind the wheel again, his verdict was unambiguous:

" There is absolutely no contest between the car now and its original configuration! Its just as if the car had been lightened by 400 kg. The engine seemed liberated. Its far more reactive than before. To such a point that I have had to modify my driving in emergencies. I arrive in the bends more quickly, and I have to brake earlier. And when I put my foot down again, the vehicle reacts instantaneously. I really feel as if Im behind the wheel of a 3 litre, and my driving pleasure is greatly enhanced ".

So from the users point of view, there is no doubt, the test is conclusive. It should result in P-Tronic equipping further vehicles used in similar circumstances.

Other opinions on our box-units: 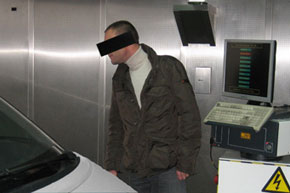 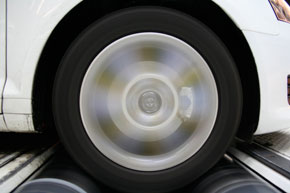 The Belgian Federal Police use a P-Tronic additional box unit on an unmarked car. The testbed revealed increases of 41 bhp and 87 Nm. 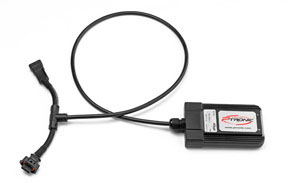 It is a digital additional box unit which P-Tronic installed in the Belgian Federal police vehicle.